Looking Back at Agnyatha: The Journey from Manuscript to Book 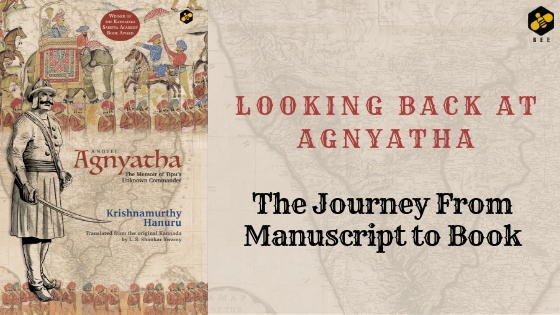 I have been working with BEE Books for quite some time now. First as a freelance proofreader and editor, and then later as a full-time employee. And each time, each new manuscript that found me has enriched me and challenged my boundaries. When July last year Esha di called me up and asked me if I would be interested in working on a translation I immediately said yes without knowing what lay ahead. When the manuscript of Agnyatha: The Memoir of Tipu’s Unknown Commander was finally mailed to me, and I read the first few chapters, I was at the same time excited and, to be honest, a little terrified too. Excited because I would be working on a colossal project, and terrified because of the exact same reason. I have worked on translations before but they have all been from Bengali, a language I am deeply familiar with. I would always go back to the original when in doubt. This was a translation of a popular Kannada novel. Endorsed by Mr. Girish Karnad, and U. R. Ananthamurthy. Authors whom I’ve read and revered. Not having an iota of knowledge about the main language also posed as a huge challenge, but I was able to overcome it with the help of Mr. K. Aravind Mitra, the author’s son, and now a friend.

“Is the essence of the original being retained?” “Am I anglicizing it a bit too much?” “Is this how it was written in Kannada?” All these questions surrounded me through the months of editing. We would often discuss the sublime points that rendered this novel its uniqueness. The narrative is steeped in the rich Kannada culture and ethos and maintaining it was a daunting task.

Agnyatha is set in the era of Tipu’s reign—an epoch we’re all familiar with through history books and shows. But it does not speak of the known facts. Tipu appears in just a few pages not only as a king but also as a father. He is the “Tiger of Mysore”, and also a failed ruler. However, this story is not about him. The unnamed commander whose memoir is the book is a person who reeks in flaws but wears them boastfully, like a shining armour. He had no redeeming qualities. A serial philanderer and thief, he commanded everyone with false authority and prided in his shallow achievements. But ironically it was these same qualities that lent the novel its essence. The protagonist was true to his upbringing, to his age.  He was what was expected of him.

The author has seamlessly entwined palatial intrigues with the problems of the plebeians. He has shown how the whims and fancies of those in power could have potentially life altering effects on the commoners. How war affected the subjects most. With a surprising twist before the cathartic end, the novel subtly speaks volumes.

I am particularly lucky because not only was I involved in the editing and the proofreading process but also had the chance to coordinate along with Esha di with the cover designer and illustrator. I clearly remember the thrill of seeing the cover for the first time. A sense of finality had from then started to seep in.

Now, as the book is ready to go to the readers, I am again excited and terrified. Months of hard work and perseverance will now be made available to the public. If I am to draw an analogy, I would compare myself with the mother bird who has prepared its young one to fly and is now looking at it as it gets ready to soar the sky.

It has been an enlightening journey for me as a reader and editor. And I hope you will enjoy it as much as I did working on it.